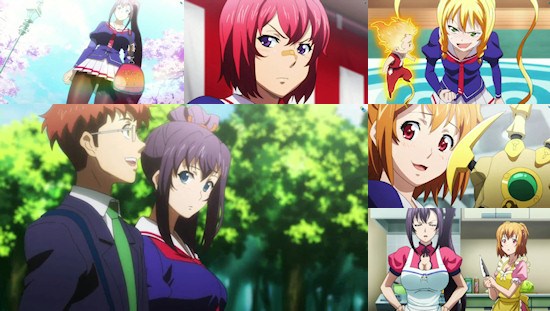 AIC's anime adaptation of Maken-ki is a fan service heavy, harem sex comedy.  To be honest, that's pretty much the only pertinent information you'll probably need from this review, so if you're clicking the close button on this page before even reaching this point I don't blame you, whereas if you've just found yourself "oh good, I love those" then nothing in the paragraphs to come will dissuade you most likely.

Still, in the name of doing things properly it's only right that I give this streaming series a fair crack of my reviewers whip, even if the proverbial equine creature beneath it shows not the slightest twitch of life.  At the heart of Maken-ki is a boy named Takeru Ooyama, the childhood friend of the clearly smitten Haruko Amaya and a lad about to embark upon life at a new and decidedly unusual high school.  The school in question is Tenbi Academy, a previously girls-only institution which has now opened its doors to boys - a big mistake, judging by Takeru's hormone-driven excitement.

The reason why Tenbi Academy is so unusual is down to the focus of its education, that being upon the dual concepts of Maken and Elements - however, given that even the series itself can't be bothered to espouse upon these concepts properly even after five episodes, I can't be bothered to try to make sense of it myself.  Ultimately though, this whole idea boils down to the students of the school having special abilities which allows them to fight and duel with other Maken users for... well, I'm not exactly sure there's a reason for it, unless skirts flipping up and clothes being ripped off in battle count.

No sooner has he arrived does Takeru draw attention to himself in the usual harem comedy fashion - falling on top of girls, accidentally kissing them or groping their boobs in the process and catching sights of panties at an alarming rate.  Despite all this, by the end of the first episode Takeru finds himself with a so-called fiancée who appears out of the blue wielding an unusual Maken to save him from the wrath of another girl, Himegami, who ends up moving into his apartment anyway along with said fiancée and the aforementioned childhood friend.  Is there more to our bespectacled protagonist than meets the eye?  As the series progresses, we begin to realise that he's less powerless than even he assumes, and not a moment too soon it seems as nefarious forces are at work around the academy and its surroundings.

Any such threats rarely interfere with the real modus operandi of Maken-ki's early episodes however - that being to squeeze in as many gratuitous flashes of underwear and/or female flesh as ever, complete with that staple part of modern TV anime in the form of clumsy censorship to encourage later DVD and Blu-Ray sales.  These first five episodes are mostly a cavalcade of tired old tropes and plot devices, from a visit to a hot springs to a "date" where the couple are spied on by jealous friends, extending all the way out to the show's various characters and beyond.

You get the feeling that this is a series that doesn't even care about its own plot - it grudgingly pauses occasionally to deliver a little exposition or move the story, but even then it's often like a dog in heat with Attention Deficit Disorder as it begins to explain something before becoming distracted by its own fan service, at which point it races off to chase a proverbial car down the street while leaving us none the wiser.  Similarly, beyond the clichéd characteristics they demonstrate there's little attention paid to the show's characters either beyond their obvious physical assets, giving you no real reason to care about their feelings or any peril they might find themselves in.

What this leaves us with is a lifeless, heartless corpse of a series, albeit one dressed up in beautifully rendered, sexy underwear.  Maken-ki is made to titillate and arouse, and perhaps does a decent enough job of it in the same way that you might pick up a top-shelf magazine not to forge a deeper connection with the personalities of the girls within, but rather to gaze at and salivate over them.  When it isn't suffering from the horrendous encoding issues on show in episodes three through to five as presented by Anime on Demand, this is a colourful and decent looking (if terribly generic) series, which is about the only positive I can bestow upon one of the laziest anime series I've watched in quite some time.

You can currently watch Maken-ki! in streaming form via Anime on Demand.

3
A lazy, generic fan service series that has nothing of worth to offer beyond glimpses of female underwear.
LATEST REVIEWS
On-Gaku: Our Sound