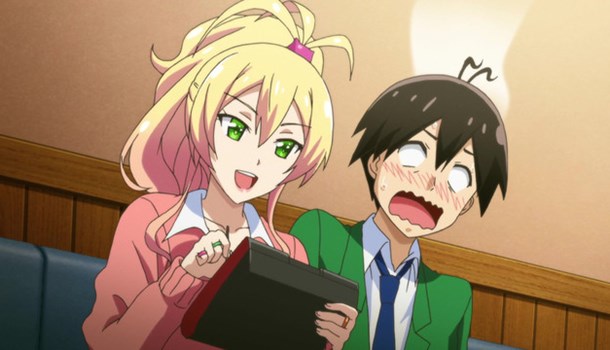 Hashiba Junichi is in many ways your classic put-upon anime high school boy, and like most lads his age he can’t stop thinking about sex. Enter the titular gal of the series, Yukana Yame, who - against all odds - Hashiba somehow manages to pluck up the courage to confess to in episode one. Even more surprisingly, Yukana takes him up on the proposition, and suddenly this ill-fitting couple is dating. However, that’s where the trouble starts, with Hasiba now consigned to constant fantasies about losing his virginity - only further agitated when an assortment of other ‘gals’ spring out from the woodwork, and all of them want to get with him too! What’s a guy to do?

Within the first few episodes, the show already has the makings of a classic harem outing, and with some surprisingly explicit material (albeit censored in the streaming version), it could be all too easy to file the show alongside classics of the genre like High School DxD. But in many ways, it’s far more like an extended replay of Oshiete Galko-chan, but this time told from a boy’s perspective. Sharing a bold, colourful art style, as well as a clear love for toilet humour - the two shows stand out from a raft of more average anime comedy fare through simple virtue of telling the kind of stories real high-schoolers genuinely obsess over.

Putting you firmly in the mindset of Hashiba himself, the show’s obsession with sex can come across as almost overwhelming at times - and at this stage it’s easy to imagine the premise wearing thin as the series moves toward its conclusion. Though for the time being the humour mostly sticks. The characters feel refreshingly honest and true to life. While this is certainly no naturalistic look at high-school life, there’s something about Yukana’s concerns over whether people truly like her, beyond the facade of lip gloss and blonde tresses, that is immediately endearing.

Much as Galko-chan also used its garish exterior to conceal a surprisingly positive message about the power of friendship, so too does My First Girlfriend is a Gal. This time in the form of Hashiba’s classroom bros, an assorted mix of misfits that each entertains their own particular fetish. There’s a weirdly charming camaraderie between this ragtag bunch, which resembles nothing less than Channel 4’s very own adolescent sex-comedy The Inbetweeners. With its sit-com like setups and fascination with lewd humour, My First Girlfriend is a Gal might seem at first like just another aimlessly dumb fanservice show, brain firmly planted in its pants - but look deeper and it quickly emerges as one of the most genuinely funny, sharply observed anime comedies in quite some time.

You can currently watch My First Girlfriend is a Gal in streaming form on Crunchyroll.

8
A hilariously lewd comedy that comes with some surprising depths.
LATEST REVIEWS
On-Gaku: Our Sound