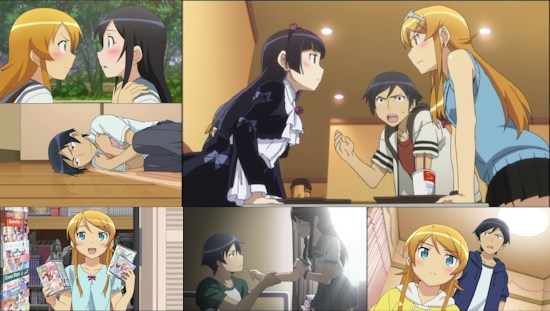 The little sister - an enigma to an only child, and in many cases equally so to their elder brothers. We could pretend that this enigmatic quality is the driver for the slew of shows prominently featuring little sister characters in the wake of the impact that this particular series had, but let's get real for a moment - it's often more focused on the fetish of the taboo that the brother-sister relationship represents from a sexual perspective. It's here that there's a clear delineation between those with siblings and those without - the concept of a sister as an object of desire is simply baffling to those who have a sister themselves.

In these terms, and given the number of base or otherwise lazy "little sister" shows have pervaded anime over recent years, it would be easy to dismiss Oreimo out of hand - after all, it started the trend (in recent times at least, it's been around within anime in a broader sense for decades), it's full title (My Little Sister Can't Be This Cute) has been parodied to death and beyond, and its second season quickly achieved notoriety for all of the wrong reasons. However, that's an argument for another day, and provided you can put all of that baggage to one side for a moment, this is a series that might pleasantly surprise you.

Our protagonist for the series is Kyosuke Kosaka, the elder of two siblings in the Kosaka household and a put-upon elder brother to his sister Kirino. While Kyosuke is an unremarkable high school boy, Kirino is very much the apple of her parent's eye - with good grades, a career as a successful model and a promising talent in athletics, it's easy to see why she is the child they boast about while simply leaving Kyosuke to do more or less whatever he pleases.

But is Kirino really the perfect daughter? Kyousuke's image of her threatens to come tumbling down after he happens upon an item which doesn't seem to fit any member of his family - a DVD case for a magical girl anime, within which is encased an adults-only visual novel... and one about sleeping with your little sisters to boot. Hard though it is to believe, Kirino is a closet otaku - literally, as she reluctantly reveals to her brother a hidden wardrobe packed to the rafters with games, anime and merchandise. There's no way that Kirino can tell her model friends or classmates about her hidden passion, but this has left her frustrated by her inability to share this love for anime and the like. Thus, it's up to her big brother to help her find some new outlets for this passion, bringing her into contact with friends that will play a big part in reshaping her outlook on life.

Thankfully, it's this angle which much of Oreimo focuses on - for all of its fixation with the idea (and ideal) of the little sister, the series is just as much a story of coming to terms with being an otaku and how to function as one as anything else. In this sense, Oreimo plays out as a modern take on Genshiken, albeit a slightly more idealised and less grounded one, as a series packed with tales of a group of fans with a love of anime and everything that goes with it. This aspect of the series is also a whole lot of fun - Kirino's excitement about every aspect of her hobby is overblown but still fundamentally easy to relate to, we have episodes dedicated to the early stages of producing an anime and video game development alongside more traditional fare like Comiket visits, and the arguments over the merits or otherwise of particular anime feel a lot like... well, our own podcast at its best. Oreimo may not always be on point with its portrayal of relationships, but it certainly comprehends the life and behaviours of an otaku.

Outside of this sphere, the series is more of a mixed bag. Make no mistake, Oreimo has some great characters - Kuroneko's mix of bored cynicism and burning passion seasoned with the behaviour of a chunibyo never fails to steal a scene, Kyousuke's near-constant exasperation and moments of well-meaning bravery fit his role well, and even Kirino occasionally produces great moments of comedy and emotion. However, sometimes the characteristics of these individuals get pushed too far - Kirino in particular becomes manic to a ridiculous degree at times with Kyousuke often following suit, while other characters occasionally threaten to slip outside of their norms into something entirely less believable.

All of this becomes a particular problem at times with the relationship between our two lead siblings. In fairness it's often perfectly placed - Kirino's pure disdain for her brother and his sheer existence feels like the kind of treatment I've seen meted out to brothers by their sisters amongst friends, but sometimes this is pushed too far into the realms of the unbelievable, threatening to wreck whole chunks of episodes on occasion. On the flipside of this, there are obvious moments where the show can't resist picking at the incest scab which lurks beneath the surface of everything it does - even with a healthy suspension of disbelief Kirino and Kyousuke's relationship never makes an ounce of sense when regarded in that way.

Yet, in spite of these missteps, and even revisiting the series in the knowledge of what is to come in its second series, I still really like Oreimo - it's entertaining, it's funny, and it rises above the kind of fare desperate to make itself popular with otaku that we so often see. This is a series that can talk the talk and walk the walk of the hardcore anime fan, and you get the impression that those involved in the show's creation recognise both the wonders and the absurdity of our fandom as they mix expert observations with a grounded sense that there's more to life than simply identifying as an otaku to the exclusion of all else; push past those incestuous undertones and you'll find a surprisingly warm and engaging series.

Oreimo is also a surprisingly nice-looking series. Its character designs are uniformly great, and breaths all sorts of life into its Akihabara locations amongst others to make the passion of those exploring it all the more believable - it's hard not to feel a little excited yourself at the stores packed with books or figures, or the mecha anime themed cafe that becomes home to some important discussions. Unfortunately, this is tempered rather by the DVD-only nature of this release - the NTSC to PAL conversion process hasn't been kind to this series, and there's an indistinct quality to the entire presentation that is most unsatisfying. This isn't the kind of series that'll be ruined by the DVD format by any stretch (and have you seen the price of those US Blu-rays?), but even an NTSC DVD edition would have been a big win here. Still, at least all sixteen episodes are present and correct here, including the all-important "True Route" OVA instalments.

The release also features more typos and errors in its subtitles than we'd like to see - again, nothing that's a deal breaker, but there are plenty of irritating mistakes that would have been corrected with a proper quality control check over its subtitle track. Given that there's no English dub here, the subtitles are all-important, and for all of the well-placed translation and language notes that crop up at important times we'd love to have seen a little more care and attention afforded it. The same could be said for a minor audio sync issue present on the first disc of this release - it didn't ruin the viewing experience for us, but the slight delay between on-screen actions and audio might irk you more if you're sensitive to such things.

The first series of Oreimo is most definitely one of those shows that I'd recommend to any anime fan, albeit in a sentence which goes "Oreimo is really good, but..." before listing some notable caveats. We'll talk about season two in its own right next month so that's a discussion for another day, but beyond that this first series does have its issues - if can't stomach the incestuous undertones, or indeed if you can't stomach Kirino's personality or behaviour that occasionally goes beyond the pale to a significant degree, then this might be enough to kill the series dead for you. Come into the series with a relaxed attitude and a determination not to give too much credit to its ogling of a younger sister character, and the result is one of the best otaku comedies out there. It's no Genshiken, but it's surprisingly close to it in its quality, and if you're part of the post-Genshiken generation of fans (and boy does it make me feel old writing that) then this representation of your fandom may well even resonate more strongly.

8
Aspects of its story or characters may be off-putting, but if you can live with them then Oreimo's first series is arguably the best otaku comedy in a generation.
LATEST REVIEWS
On-Gaku: Our Sound