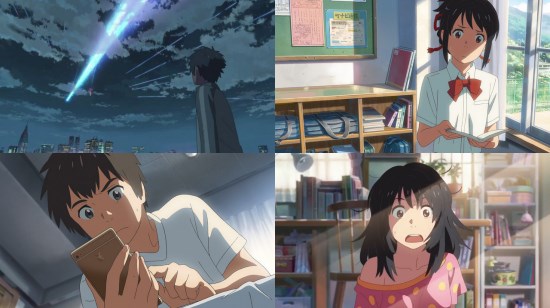 Although Makoto Shinkai's name has been well known amongst anime fandom for well over a decade now, full-blown mainstream recognition has mostly eluded him throughout his career... until recently, that is. The Japanese theatrical release of his latest film, Your Name, has seen stock in the director rocket into the stratosphere on account of its boasting tremendous box office numbers, easing into the top ten in terms of all-time box office receipts in Japan within its first couple of months in cinemas. The Japanese public have spoken and they clearly adore Your Name, but how does it play to a UK audience?

Your Name introduces us two characters in the form Taki Tachibana and Mitsuha Miyamizu - both high school students going about their everyday lives, albeit in decidedly disparate locations with the former living amidst the hustle and bustle of Tokyo while the latter enjoys a much quieter life out in the country. Both individuals have found themselves experiencing similar phenomena however - waking up tear-eyed some mornings as if from somebody else's dreams, and perhaps more alarming hearing word of unusual behaviour in their daily lives that they simply can't remember.

This state of affairs only becomes more troubling when Mitsuha finds a random note that she didn't write scrawled in a school text book: "Who are you?" it demands. When Mitsuha finds herself living a realistic dream of spending a day in the body of a random teenage boy, she similarly decides to leave him a diary entry, which paves the way to the truth of the situation - Taki and Mitsuha are randomly swapping bodies, awakening to find themselves in their own body one day, and the other the next.

Cue plenty of comedy from the film's early running, as the two characters desperately try to familiarise themselves with one another's lives, not to mention one another's bodies. As time progresses an impromptu system of passing notes and messages and the formation of rules as to what the other should and shouldn't do forms, easing the passage of each day when body-swapping occurs although never making it entirely without issue for either party. Yet, in spite of all of the issues the situation causes, a bond begins to form between Taki and Mitsuha in spite of their distance - a not entirely unexpected turn for a Makoto Shinkai film, it has to be said.

However, all of a sudden the body-swapping antics stop and never resume, leaving both parties wondering what has happened to the other. The answer is a decidedly complex one as the true extent of that distance becomes apparent, leaving Taki in particular to puzzle over a seemingly impassable gap that has opened up between the two of the them.

As you can tell from that synopsis, Your Name is yet another take on the theme which seems to obsess Shinkai - so why is this the film that's seen him make a real breakthrough in terms of popular recognition? In essence, the success of Your Name is largely down to just how accessible it is as a film - as long as you aren't put off by an opening few minutes which clumsily juggle with how to introduce its premise, you're suddenly thrown into a relatively traditional body-swapping story filled with predictable but pitch perfect comedy that absolutely nails every gag it sets up. This is all helped along by the fact that both the two main characters and the extended cast are a likeable lot - Taki and Mitsuha are both easy to root for, and their relationships with others are played out well to make it believable that others would tolerate their acting out of character simply to nurture or humour their friend. While the press have been keen to stick the "new Miyazaki" label on Shinkai on account of this film, Your Name's comedy feels more like Mamoru Hosoda at his sharpest if we're entering those realms of comparison.

The film's comedy chops are never jettisoned entirely, but they do slip into the background a little more as the film progresses and things take a more serious tone. We can't say any more about it for fear of spoiling the whole thing, but Your Name is equally adept at building and manipulating its sense of drama and urgency, as emotional revelations are followed by a race to fix the issues at hand. It should probably be mentioned at this point that Your Name also successfully manages to land its conclusion - while many of Shinkai's works have arguably faltered at their final scenes this effort manages to conclude in a satisfying fashion, albeit after an overly long segment of beating around the bush about it.

Indeed, it we were to level one complaint at Your Name it's that it overly stretches some segments of the film, hanging for too long on events that could be handled more quickly and concisely. While none of this even comes close to wrecking the pacing of the film, it does leave one or two occasions where you wish it would hurry along a little more, if only because you're suitably engaged in the story to want to see what comes next.

Makoto Shinkai's films have always had no shortage of visual beauty to them, and this is certainly the case once again here - the realistically detailed rooms, locations and paraphernalia bring life to every scene, and actually further accentuate the city versus country divide of the film to good effect. What is perhaps more unique about Your Name is the level of personality imbued within its character designs, bringing us individuals who are far more visually expressive than previous Shinkai works as you might expect from the character designer for the likes of AnoHana and Toradora. Add in a more ambitious overall visual look and feel to the film - helped along by some notable former Studio Ghibli talent - and it's no surprise that Your Name's animation is a tour de force that is well worth catching on the big screen if you can.

If you're looking for an entertaining film, pure and simple, then Your Name fits the bill perfectly - it's laugh out loud funny, and also succeeds in being emotional and poignant without becoming overbearing in its attempts to evoke those emotions. This isn't the kind of film that will necessarily reduce you to tears or leave you deep in thought for hours after you see it (even if it does sow the seeds of some interesting trains of thought around the nature of tradition in particular), but it never really seeks out such a role either. It would be reductive to call Your Name a popcorn flick - that would be to undersell its smartly realised premise and enjoyable take on a more traditional body-swapping story - but it is a film for all and sundry to enjoy unabashed in a way that its director has never managed before, creating a film that is well worth your time in the process.

The film has been acquired by Anime Limited for afull theatrical release on 24th November, and a home video release in 2017

8
A highly enjoyable mix of comedy and drama that blends two well-worn concepts - body-swapping tales and Shinkai's exploration of distance between individuals - and manages to make the resulting film feel fresh and vibrant.
LATEST REVIEWS