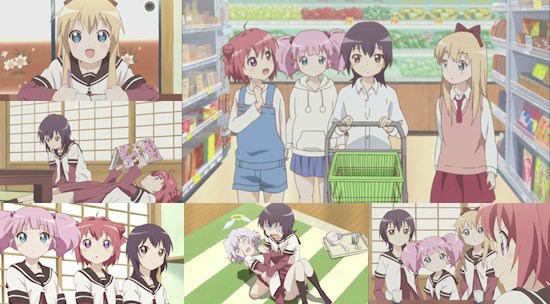 The annals of anime history are littered with the proverbial corpses of long-forgotten, sub-par school slice of life series - ever since Azumanga Daioh hit it big it's a genre that's been rolled out again and again while failing to capture the hearts of its viewers more often than not.  This summer brings us yet another contender hoping to side-step the scattered bodies of its forebears to become one of those rare, memorable slice of life shows - but has YuruYuri really got what it takes?

As we're introduced to the show's characters, it's certainly a case of "so far, so typical", as the main trio of middle school girls around which the series centres are made up of the ditzy but plain Akari, perverted and energetic Kyoko and introverted, serious Yui.  These three initial characters are soon joined by a fourth, named Chinatsu, and the roster is further bolstered by more occasional co-stars who are introduced in episode two.

For all of its generic characters (indeed, even their designs aren't really that interesting), YuruYuri's best early joke comes at the expense of this reliance upon existing tropes via a discussion about how Akari could make herself more interesting - it's both a sly nod to the fact that yes, this isn't exactly an innovative series, while also proving to be laugh out loud funny in its own right.

If only the rest of YuruYuri could boast such small but noteworthy comedic gems we might be on to a winner here, but sadly things take a rather rapid downhill turn within the show's second episode.  The reason for this almost impressive nosedive in humour is simple enough - the series suddenly becomes obsessed with some of its characters possible lesbian proclivities.  This brings us an entire episode of innuendo, fantasy and nose bleeds aplenty; an event which could have been at least mildly funny but instead drags the entire instalment down kicking and screaming with it in terms of comedy as it focuses instead on trying to titillate the viewer with little success.

Although moments which cater very much to the "yuri" element in the show's title remain throughout the series thus far, thankfully episode three shies away from the in your face associations offered by the second instalment and benefits all the more for it.  The series still doesn't succeed in being laugh out loud funny, but it does at least raise a smile here and there whilst making for what is a more pleasing experience overall that utilises its characters far better than simply treating them as pieces of meat.

To answer our initial question, then - no, YuruYuri shows no real potential to burst out from the crowd of clones and establish itself as a gem of the slice of life genre.  While the series tries to borrow elements from similar shows that *have* proved successful, it seems to have missed the whole point of what made those series what they are - it has a cheeky eye for the sexual but can't rival Mitsudomoe's shock tactic humour, it uses a club setting but without the focus of K-ON, and it tries to build character dynamics like Lucky Star but fails almost entirely at doing so.

This isn't a terrible show, provided you can get over the idea of middle school girls indulging in sexual fantasies about one another, but it's almost instantly forgettable - you can almost guarantee that come the autumn, nobody will be talking about this series.  It might be worth checking out YuruYuri for the odd smile and giggle it will potentially raise if you're on the look-out for new anime comedy, but it certainly isn't a series you'd be advised to approach with anything other than low expectations.

You can currently watch YuruYuri in streaming form on Crunchyroll.

5
Yet another mediocre slice of life comedy anime - it might raise the occasional smile, but it has little more to offer the viewer than that.
LATEST REVIEWS