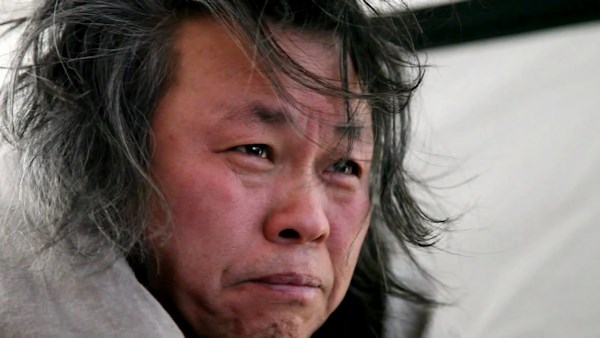 Kim Ki-duk is at once one of Korea’s most highly regarded auteurs and one of the most divisive. Starting from humble origins he’s made fifteen films in as many years, many of which have gone on to great critical acclaim and recognition at international festivals whilst also attracting some of the most vitriolic reviews ever to make it to print. Love him or loathe him, his absence on the international festival circuit following 2008’s Dream seems remarkable given his previous rate of work. What exactly kept him away all that time; was he bored or stuck? Did he just have nothing more to say for the moment?

During the making of Dream, there was a terrible on-set incident where a stunt went badly wrong and an actress was almost killed. Thankfully, Kim Ki-duk himself spotted the malfunction quickly and his swift action saved the actress’ life. However, the accident had a profound effect on Kim Ki-duk which seems to have provoked a near nervous breakdown, seeing him retreating to live in a tent inside a wooden cabin in the snow covered mountains. It led him to question everything about himself up to this point - why is he making films, what does his art mean, is his art important? After all, your art might be worth dying for but when it threatens someone else’s life, a life that might be lost though a stupid accident, it can’t ever be worth that. As the director Kim Ki-duk felt himself to be ultimately responsible, it’s this feeling of personal guilt that seems to have forced him to reconsider his life’s vocation.

Still, it seems even in the depths of his deepest despair Kim Ki-duk was desperate to make a film, yet was at the same time was totally unable to do so. Arirang is the film that arose from this extended period of emotional flux. Ostensibly, it’s series of conversations between the different aspects of Kim Ki-duk's personality in which he hopes to illuminate his true self through a sort of cinematic catharsis intercut with footage of Kim Ki-duk going through everyday life in the cabin. There appears to be the director Kim Ki-duk who talks to us about cinema and observes the conversation of his other two selves through the computer screen; the Kim Ki-duk that is experiencing the breakdown - referred to by the other selves as ‘The Shadow’ and a dispassionate self that tries to provoke confessions from ‘The Shadow’ (‘The Shadow’ refers to this Kim Ki-duk as ‘The Natural’).

I say ‘ostensibly’ because we obviously can’t know how much of this is real and how much is fantasy. It is a very raw film and often very difficult to watch - the audience is often made to feel intrusive and voyeuristic. We watch this man at the extremes of sanity but we can do nothing to help him; we don’t even know if we should be watching this or not - only that Kim Ki-duk must want us to understand something by showing it to us. On the other hand though, there is also the element of performance that’s ever-present in the film. What we are watching is a contrived retelling of a self-examination - it’s making a deliberate attempt to mess with our own perceptions and responses. Even Kim Ki-duk himself doesn’t quite seem to know where the lines are. The final scenes of the film take this idea even further, departing radically from the way the film has functioned up to that point as the ending plays out much more like an extended metaphor.

Of course, what is to some people a profound meditation on the nature of art coupled with an ongoing reaction to an existential crisis will to others seem sickeningly self-indulgent and pretentious. Kim Ki-duk himself even seems to acknowledge the inevitable grandiosity of the project by winking at us or laughing at The Shadow’s confessions. For some people, one hundred minutes of a film director whinging at his own alter-ego whilst being assaulted by literal and metaphorical ghosts is going to be absolute hell - the sort of thing that gives art house a bad name. For my part, my tastes probably run a little to the pretentious anyway but I found Arirang to be a profound and moving, if frustrating, experience that I’m quite keen to spend more time with in order to understand it better. If you’re looking for something with a clear narrative structure or something with more obvious entertainment value I would say that Arirang probably isn’t for you. It’s certainly not a film with mass appeal and obviously wasn’t made with that intention. It’s a deeply personal project that was probably made in the first instance for its creator's benefit - perhaps that Kim Ki-duk went on to release Amen not so far apart from Arirang suggests something about it worked and enabled him to get back to filmmaking in some sense at least. Like many of his films, Arirang is going to provoke some very extreme reactions, but then what is art if it doesn’t stir things up a little?

Arirang is screening in cinemas nationwide from June 8th 2012, courtesy of Terracotta Distribution

9
A raw and difficult film that some will find pretentious or self indulgent, but neverthless it's a fascinating examination of the mind of a filmaker on the edge.
LATEST REVIEWS