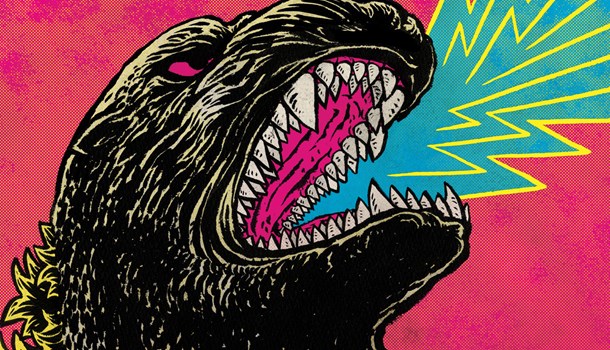 Welcome one and all (or perhaps just the one person mad enough to read this) to the first part of my film by film review of the Criterion bookset: Godzilla: The Showa era films 1954-1975. From the great to the… well, so far I’ve only watched the great Godzilla of 1954 so it may be: to the not so good or the just downright awful. Either way, this journey will be shared. Lucky you! And this is 15 films, I warn you.

But first it’s worth investigating slightly this bookset. Bookset, you ask? Well, this set is a beautifully made package though frustratingly sized and impossible to store (mine is currently sat on the floor next to the minor bookcase of films) but nevertheless, like their previous boxsets of Lone Wolf and Cub and Zatoichi, this is a set that has real love and design nous at its heart. The bookset, sized like a coffee table talking piece, has artwork that flames off the page (literally this afternoon I was doing a video call with a friend at work and showing his young kids it, being lovers of the original films, and they loved the garishly coloured designs). Each film has a page of information dediacted to it before the final sturdy cardboard double-pager wherein 8 blu-ray discs contain the films all set in a design of monstrous destruction.

But first up is of course Godzilla. The original and I suspect the best. Full disclosure, I’ve seen it before, several times but none of the rest. The only other Godzilla film I’ve ever watched is Hideaki Anno’s Shin Godzilla and mainly then because of the Anno connection. Even when it comes to kaiju, beyond Mothra, pretty virgin territory me; so here I am quite the blank slate. (I have two boxsets of Gamera movies to watch, too, but are currently unopened. They only arrived Saturday.)

When it comes to Godzilla it’s easy to think: is it inspired in part by Conan Doyle’s The Lost World? The parallels are impossible to ignore but I think instead it shares more with a film like Imamura’s Profound Desires of the Gods, which delves into the folklore of a small isolated island, with its own unique gods. Godzilla, or more correctly Gojira (like I need to tell you) is one of those gods turned bloody rampaging monster. For ships go missing near Odo island! And the fisherman of Odo are suddenly finding no fish are to be caught. Then, on Odo island one night there is an earthquake? A typhoon? Or a Jurassic monster dredged up from the seafloor that destroys all in its path leaving houses obliterated and death and… radiation. It can only be time before it reaches the mainland and Tokyo and who can save Japan but Ogata (Akira Takarada), who works for the shipping company losing ships, who loves: Emiko (Momoko Kōchi), daughter of eminent palaeontologist Dr Yamane (Takashi Shimura) and the disturbing one-eyed scientist, Dr Serizawa (Akihiko Hirata) who has made a startling discovery that cannot be let loose on the world.

Godzilla may now be inextricably linked to the kaiju movie and sequels and ripoffs of varying degrees of quality, which can mean that it is easy to neglect that Godzilla is genuinely a very, very good film indeed. Having recently watched (and reviewed) Mothra you can see how Godzilla is both the template for that and how it has some of the lazy absurdities inherent to the genre but nevertheless I think that you should consider Godzilla not in the context of kaiju or other historical monster movies but more in genre pictures that reflect a specific time and place and most importantly a particular threat: whether that is the late 1930’s adaptation of HG Well’s Things to Come that expresses anxiety on the threat of war and unparalleled destruction or more contemporaneous to Godzilla: Robert Wise’s The Day the Earth Stood Still reflecting a nation’s cold-war paranoia; or, Don Siegel’s The Invasion of the Body Snatchers highlighting just how wrong the pervasive McCarthyite witch-hunts were. Godzilla, likewise, reflects a nation in fear of the bomb. Interestingly it arguably reflects less on the impact of Hiroshima and Nagasaki. As a film critic, of an age to know, describes in one of the extras, at the time of Godzilla, only nine years after the war, little was known about either cities and the atom bomb used, because for all the American occupation forces promoted freedom of speech, it is described how any information relating to Hiroshima and Nagasaki was ruthlessly suppressed. That they were not important influences is doubtless, just as the American occupation would be too, but perhaps not as central to the story as often thought. Godzilla emerges from its underwater hideaway because of American hydrogen bomb tests. Godzilla as fear of out of control destruction and anger at American occupation is all too clear. Ironically, many American reviews I’ve read (both historical and more recent) miss this completely, instead focussing on the island of Odo’s belief in local gods to suggest Godzilla is a manifestation of some Japanese self-punishment. A surreal nigh perverse interpretation to be sure.

Godzilla then really does exist as an expression of a nation’s anxiety of the bomb hanging over them, a supremely destructive sword of Damocles. And what an effective film. Like the comparator films I mentioned earlier Godzilla takes its subject matter with deathly seriousness. That does not mean it is not without humour but its heart is an anxious but also a complex one. One of the beauties of Godzilla is both Godzilla as a creature and the nature of its destruction and how they are both potentially scientifically important and potentially impossibly destructive. Shimura’s Dr Yamane sees Godzilla as an important scientific discovery that must be studied to understand natural history and is stuck between not wishing to see loss of life but also recognising Godzilla not as a monster but as a piece of lost history improbably rediscovered by human destructiveness. Yamane in many ways is a key character and the casting of Shimura is important to the films seriousness. Shimura brings gravitas and complexity to a role that in other films would be overly simplified: the character that runs in front of something dangerous and screams: “we must not hurt…” splat, as the monster steps on him, evidence that the character is wrong and NO! we must destroy all monsters. Instead Dr Yamane is both a voice of reason and a voice that is devastated as violence is used against Godzilla to protect other life. There is no easy answer for him, and the effect on Dr Yamane is terrible to behold because there is no reasoning with Godzilla as there is no reason with the bomb that falls from the sky to destroy your city. 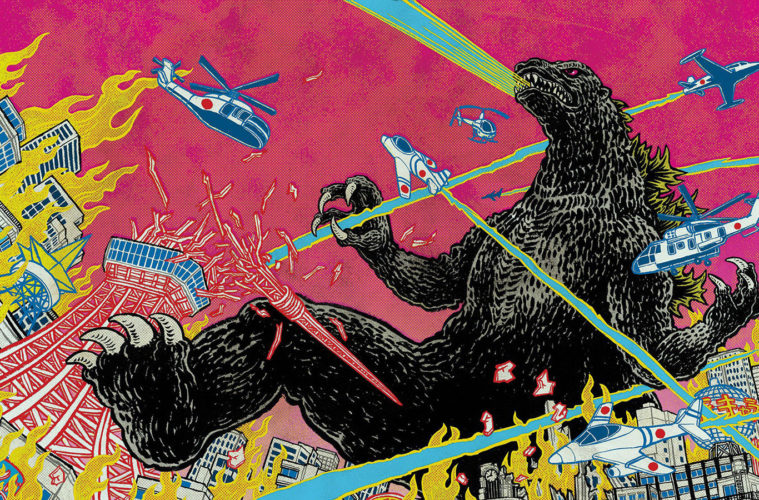 Equally the answer to Godzilla’s menace, held by the apparently sinister Dr Serizawa provides hope but also terrible danger. Like Dr Yamane, Serizawa’s character in analogous films becomes would become a trope character but here is humanised. He is engaged to Emiko though it is obvious Emiko loves Ogata as much as Ogata loves her. The answer to Godzilla is also absurd – I won’t say why – but it is; it’s pure science fiction deus ex machina like watching Star Trek and everything will be OK as they can fire an inverted double-backed mirror-reflected tachyon particle beam into the sun that will refract and disperse the death rays about to kill them all. The key of course is the human story, inclusive of that of Emiko and Ogata, who are ostensibly the film’s stars. Though throughout there are actors that you either think you know or look like those you do, and perform their parts just as you expect. But they are arguably secondary to Godzilla but I think the film’s real star is director Ishiro Honda.

The black and white photography has a deliciously contrasted darkness to it that frequently underpins the darkness of the social fear at the heart of the film. Plus it means that the special effects, now famously recognised as a man in a rubber Godzilla suit, fits together seamlessly. Not just that but it also causes the special effects to have a grainy, curiously gritty reality to them. As Godzilla crashes through Tokyo it all feels too horrifically real. It’s not just a city being torn apart for disaster porn but it becomes real people in real life watching their lives and livelihoods being crushed with the ease that we can tear up a piece of paper. Plus Honda always ensures it remains at the human level, reminding us that within this destruction there is the mother who hugs her children to her, saying they will meet their father (we assume lost in the war). It’s not rocket science but Honda true to the spirit of the film always and remorselessly returns themes and scenes back to the personal and so the emotional level. This means that the destruction wrought is genuinely meaningful not just pretty destruction. Even if that destruction looks startlingly real, for all the film’s age.

Moreover there is a real economy to the film making. The introductory scenes are especially well directed by Honda. There is barely a frame wasted and the story is told briskly and visually. There is a real emphasis on ensuring suspense and maybe this is easier because it is the first film before the idea of sequels and so the audience are not quite sure what they are going to see, whereas now we’d be thinking: it’s Godzilla, so you either have to pile on the visuals or somehow subvert the concept. Thus the reality of diminishing returns.

The score by Akira Ifukube is also extremely memorable, moving from the experimental opening of the credits to the theme repeated throughout, it’s a perfect example of a score matching the tone of the film and without it Godzilla might feel a very different film.

I doubt anyone reading this needs to be converted to watching Godzilla, but if you avoid kaiju movies because you find the whole monster business all rather silly then Godzilla really is like watching The Day The Earth Stood Still (and no, I definitely did not watch the remake), you can watch it as a genre film should you wish but what really hits you is the human drama and human feelings that underpin the film and the reality of the resolution of both films is not necessarily one of great positivity. Yes, destruction is averted in both films (for very different reasons) but there is no genuine resolution to the anxieties raised, no easy answers given to complex questions, these are films that are deeply serious but wear their seriousness lightly and cloaked in monsters, living or mechanical, human or otherwise.

To return to my previous statement Godzilla is genuinely a very, very good film. Yes, its solution in despatching the titular monster is moderately ludicrous that in no way obviates the emotional impact and the societal concerns it raises. And that is the power of the film, as well as is Honda’s taut direction and Shimura’s small but central role as the film’s conscience. This is science fiction, this is genre cinema that reflects society’s feeling back at us and that is genre at its best and most purposeful. 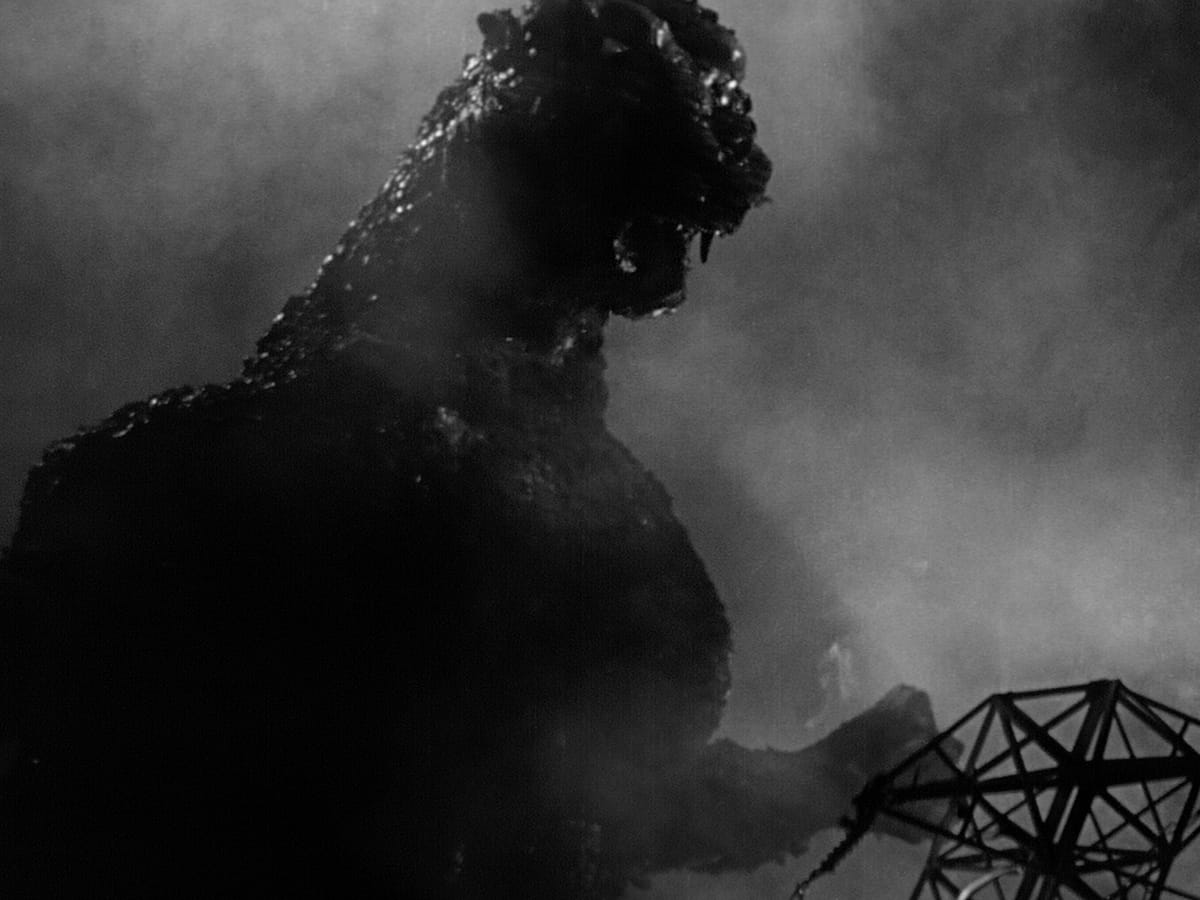 Lots! Including the American version, and no way am I watching that for love nor money.

10
The original and the best. Accept no imitations. Until my next review…
LATEST REVIEWS