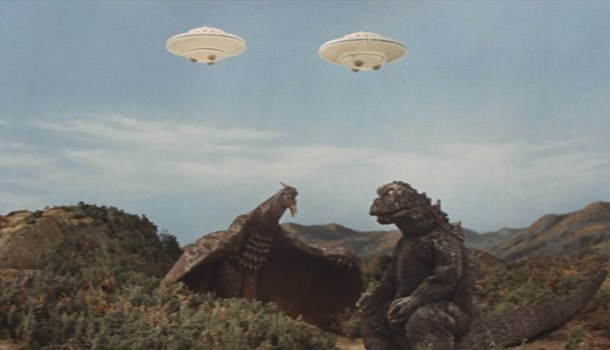 Where Ghidorah, The Three-headed Monster introduced more overt sci-fi trappings into the franchise, Invasion of Astro-Monster (1965) immediately puts it front and centre in the title sequence. Alien planet backdrops and spaceships, even the odd grounded flying saucer screams that this is Godzilla really going boldly into the fantastical and then it doubles down telling us that Planet X has been discovered in the solar system! And then we are in space, with pilots Fuji and Glenn, racing towards Planet X!

What dare we find but aliens! Hold on, these are not just aliens but Xiliens! Xiliens under attack from King Ghidorah! Who want to borrow Godzilla and Rodan from Earth to protect their planet in exchange for a great medicinal boon. But is all as it seems?

(Could we have a synopsis with more exclamation makes?! I doubt it!! Dramatic!!!)

It’s hard to know where to start with Invasion of Astro-Monster because it has an abundance of plot. So much plot its pouring out of the film with more force than Godzilla’s radioactive halitosis. There’s a point in it where your brain just shuts off and allows the film to wash over you. I’m not sure when and where that happened to me, maybe it was gradual but it happened. Reviewing Mothra I think I used the beautifully anachronistic phrase that it did not make a lick of sense; in comparison with Invasion of Astro-Monster, Mothra is a classically constructed narrative. The whole film is slightly mad and reminded of those 1950’s American low budget sci-fi movies that aired on BBC2 at 6pm on Friday, when they were not showing The Man From Uncle or Thunderbirds (or other Gerry Anderson Supermarionation shows like Captain Scarlet) when I was a young ‘un. For a start it has some of the same questionable special effects when it comes to the space and model shots as used in both the 1950’s sci-fi movies and especially Gerry Anderson’s puppet works. Many of the space vehicles and flying saucers feels right out of one of Anderson’s many series and are a tad shoddy. But do we the audience care? Arguably not because the whole film at this point is so absurd it hardly matters. We’ve either turned our brains off or rolled with the punches.

I rolled with the punches as found I was just having fun.

Just look at the Xiliens, who look curiously like the other mainly Japanese cast with some face paint applied and wearing over-sized neck-braces and Alice-bands across their eyes (that seem a mix of wraparound shades and Geordi’s electronic eyes from Star Trek TNG). Admittedly this is not so different from a lot of American sci-fi of the 50’s where aliens are always just Americans with tuftier eyebrows. ‘Cos excess eyebrow hair means alien; always has, always will. But do we care about this? Nope! Just as we don’t care that somehow the Earth, despite more bloody attacks from monsters than we’ve had waves of Covid is able to send a multinational crew into space to reach Planet X with apparent ease. And Planet X just happens to be a moon of Jupiter and the film seems to suggest we can fly out there in mere hours if not minutes. Instant communication with Earth surely isn’t possible? No problem! When you think Kubrick’s sci-fi masterpiece 2001: A Space Odyssey would only appear three years later this film they seem decades apart but again: do we care? Nah.

So what keeps us going – what kept me going? I think I enjoyed the over-ripeness of it all. Yes, again this is an utterly ludicrous story but returning director Ishiro Honda seems to know this and makes the absolute best of what he’s given. Plus as always Honda has that ability to pace a film and frame images so that the average can be interesting, and sometimes in small ways, but it is enough because unless looking for it you absorb it unknowingly and it sustains you like supping energy drinks while running a marathon (PS I’ve never run a marathon but I imagine this is the case). Like an image of the Commandant of the Xiliens and behind him all his subordinates are arranged geometrically – Honda makes something of nothing via his visual sense. The thing is Honda does this throughout his films just as here when Fuji and Glenn visit Planet X and some the effects are genuinely effective; though limited. Honda recognises he’s working with spit and sawdust and a series of small sets, so as Fuji and Glenn are moving through clinical corridors you can tell they have a single small section of corridor and a painted image at the end and yet Honda lights it so that in editing it can cut it together to make all the action seem far more expansive and realistic. Yes, I can see the mechanisms but it makes me respect Honda all the more. He isn’t betrayed by the limitations of what he has to work with but absolutely milks them for the very drop he can get and then keeps going. As always, despite an average cast, Honda seems to downplay their natural desire for melodrama and capture something hardly brilliant but enough to work within the film. There are some returning faces, like Sakurai (Jun Tazaki) as the scientific head of the space programme, who does have a certain B-movie gravitas to him; and I quite liked how American actor (albeit dubbed) Nick Adams - who you assume is included to try and make an easier sell to the American market - has a relationship with clone of clones, Namikawa, and Kumi Mizuno as Namikawa does have at least one surprisingly emotional moment and is certainly very striking.

It’s curious; my reviews it seems are becoming a paean to Ishiro Honda. This is not something I expected when I started the set of films. But it strikes me as appropriate. I think I rather blithely referred to him in my first review as a kaiju auteur, it’s one of those easy to write and very throwaway statements you write cos, well, its obvious innit, but curiously Invasion of Astro-Monster made me realise it was the right statement to make without knowing it. Because if you consider this film vs King Kong Vs. Godzilla with the dreadful American cut bilge where that just hasn’t a clue what to do with what it has, Honda has every clue. Chalk and cheese. Even the second film, Godzilla Raids Again, has its virtues but visually it is immediately a much less satisfying film and the pacing is never as well balanced as even Honda manages with the nutty-fruity plot abundance crammed into Invasion of the Astro-Monster.

As to the remaining film there are moments where you think, "eh, this makes no sense" then just in time the film drags it back to being just within the boundaries of credibility. So for all the plotting that seems like drawing concepts out of a hat and putting them together the film at least makes some semblance of sense. Plus the monster fights never become tiresome, as always under Honda’s watchful eye. Honda at one point suggests a premature slugfest, then holds back the action. That said I am pretty sure I recognised re-run footage from Ghidorah, The Three-headed Monster in the denouement of destruction, but even so I didn’t much care as it was placed into the chaos such that it didn’t much matter.

One thing that pretty much passed me by at the time but read after watching the film is the spectacle of Godzilla doing a shie victory dance – something my memory vaguely recognised but accepted as part of the general absurdity – which apparently narked Honda no end. Looking up the derivation of shie the best description is imagine Godzilla doing a Fred Flintstone yabba-dabba-do, and if you can imagine that you’ll understand why Honda would be less than pleased. Like the observation in King Kong Vs. Godzilla, how the director of the original King Kong, Merian C Cooper was horrified by what he saw as the trivialisation of his creation, Honda is perhaps seeing the same potentially unfold before his eyes. So kudos for Honda not just throwing in the towel but keeping the film on what rails are left to it.

Scoring a film like Invasion of the Astro-Monster feels to me an impossibility because unlike many films I never for a moment wanted to turn it off even if it is miles from a masterpiece. Give me five minutes of say, Von Trier’s Anti-Christ, and clearly it’s beautifully filmed and skilfully made but I’m already climbing the films for the self-indulgent bullshit unlike here where Honda in the best style does absolutely his best with the most limited means. It seems unsurprising that Honda worked a lot with Kurosawa because there is something in the director that you feel just has that knack that is described in phrases like “knows where to put the camera”; because in a film like this you see it, those little things that are hard to define and you could spend an age trying to explain but you are better just accepting that they can, because you feel it in every frame and throughout every scene. And what’s more Honda manages to make the film fun and not just dumb fun; though Invasion of the Astro-Monster hasn’t any of the thematic strengths of the original Godzilla: this is Godzilla stripped of all messaging but he still manages to create something that doesn’t just feel like dumb throwaway nonsense, even if it otherwise should be.

I’ve barely touched on the story and the characters. Because Honda deserves the final word and so I will end it simply: Ishiro Honda – to quote Wayne’s World – we are not worthy.

6
Godzilla – to infinity and beyond! Bonkers, fun, with a hint of terrible – but elevated by Honda’s ability to make something out of nothing.
LATEST REVIEWS 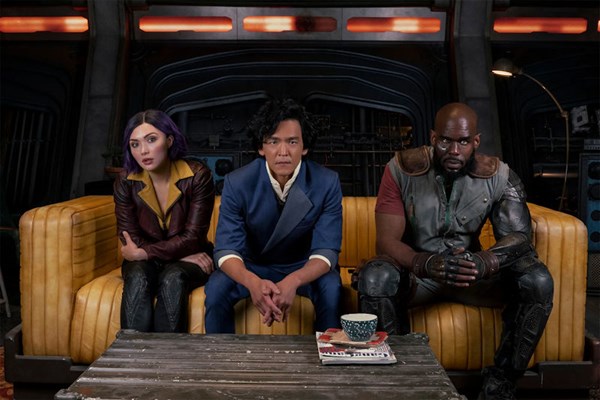