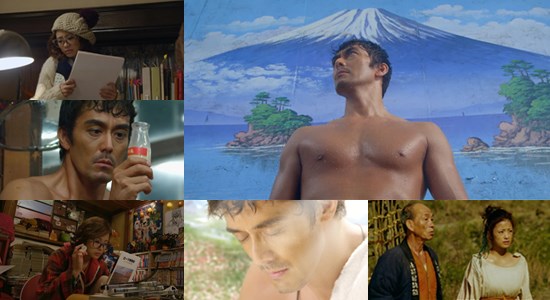 Pop quiz - what do modern day Japan and Ancient Rome have in common? Fish sauce? Emperor worship? Sandals? More than you thought, wasn’t it? Well, the correct answer is public bath houses, and sure enough the people of modern day Tokyo still love going to the public bath even though they enjoy the luxury of being able to bathe at home! Of course, bath house culture with all its social and political uses and divisions was one of the things the Roman Empire took with it wherever it went. However, there must have been a time when some Romans began to feel their baths were getting a bit stale and in need of a new ‘modern’ twist - but what to do? What if they could leap forward in time and learn from the 21st century bath culture of modern Japan! Enter down on his luck architect Lucius, who suddenly finds himself in a strange land full of equally strange-looking people who seem to have taken bath technology to its very zenith.

Lucius Modestus (Hiroshi Abe) is a once successful bath architect with a case of serious designer’s block. Replaced on a prime project because he’s been unable to come up with any ideas he decides to go for a soak at the local bath house but, whilst clearing his head underwater, he finds himself sucked through a passageway only to reappear in a very strange looking place - it’s a bath house alright, but not as we know it! As they’re speaking a strange language he doesn’t understand, Lucius assumes the elderly men bathing here must be slaves and he’s been sucked into the “slaves only” part of the baths. Some of this stuff is kind of cool though - what are these funny spigot like things for, and these handy little buckets? Wait - they have baskets for their clothes?! We could do with some these in our bit! And so Lucius experiences the wonder of public bathing in Japan to the extent that it makes him cry with joy, at which point he returns to Ancient Rome and begins to put some of these techniques to use in his designs. Travelling back and forth, Lucius always seems to run into the same Japanese girl who wants to make him the star of a manga, and a group of kindly old men. Can Lucius finally build the bath house of his dreams and stop a conspiracy against his beloved Emperor Hadrian at the same time?

Based on Mari Yamazaki’s manga of the same name (which also received an anime treatment from DLE), Thermae Romae sticks fairly closely to a fish out of water format for the the first half of the film as Lucius becomes by turns confused and then entranced by the various pieces of modern bathing technology he encounters on his travels. As a Roman encountering other people who are obviously not Roman, he of course adopts a superior attitude and assumes these people are either slaves or ought to be and so is extremely bewildered that their advancements seem to have eclipsed those of his own beloved Rome. These situations obviously provide a lot of room for humour as Lucius encounters various things that seem perfectly normal to us but strange and alien to him - his pure joy at discovering the wonder of the multifunctional Japanese toilet being particularly notable. It does become fairly repetitive as Lucius finds himself in different situations which are essentially the same joke in different colours, but then when the plot element begins to kick in later in the film it too fails to take off and feels a little too serious when taken alongside the wacky time travelling antics we began with.

Aided in his quest, Lucius meets several amusing supporting characters including the group of elderly men from the baths who didn’t really need the help of an improbable Ancient Roman to get themselves in trouble, and Mami who functions as a kind of love interest who’s cast Lucius as the hero in her next manga. Mami begins learning about the Roman Empire and takes a course in Latin, which helps a lot when she too finds herself in Ancient Rome and facilitates a kind of cross-cultural exchange as she steals ideas from Rome for her manga as Lucius stole for the baths. However, the romantic comedy element never really comes together and even as Mami continues to pine over her noble Roman, Lucius remains aloof in the universal belief that all non-Romans are inferior. Though he does come to grudgingly acknowledge that the ‘flat faced people’ as he calls them have particular strengths such as their willingness to work as a team and put collective success ahead of personal gain, he never quite sheds his Roman arrogance.

It’s all very silly but undeniably quite funny if often absurd. We hear everyone in Rome speaking in Japanese and Lucius continues to think in Japanese wherever he actually is but obviously once he gets to Japan he can’t understand what anyone’s saying and attempts to communicate with them in Latin (whilst still giving his interior monologue in Japanese). Likewise, when Mami learns Latin she uses it to communicate with Lucius in Japan but once they get to Rome, all their ‘Latin’ is Japanese too, which causes problems when the old men arrive because they’re speaking the same language as everyone else yet can’t understand anyone or be understood - which might be why they don’t get to say very much other than to Mami. It’s all quite strange and disorientating but kind of works, as does the largely Puccini based score which screams 19th century Italy much more than Ancient Rome but helps to give the film the air of classical pomposity it’s aiming for. Big, ridiculous, silly fun - no one could accuse Thermae Romae of having any kind of serious message but it does provide genuinely entertaining silliness for the majority of its running time.

Thermae Romae will be screened as part of the Roman Road Festival on 3rd July 2014 in a special presentation from Eastern Kicks.