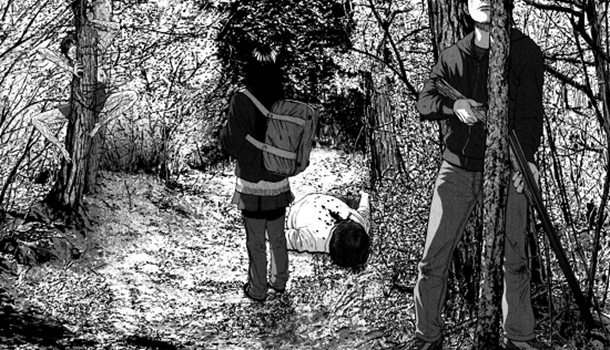 The first volume of I Am A Hero was endorsed as "the greatest zombie manga ever"  on its cover but I also happily agreed that it matched the hype with an atmospheric slow-burn opening, strong characterisation and a low-tech take on the action of the zombie apocalypse. The question remains though whether much of its appeal stemmed from the novelty of those features - now that the zombie apocalypse is well underway and the initial adrenalin burst of first contact has drained out, does I Am A Hero maintain its trope-escaping momentum or is it slowing down into a more conventional rotting shuffle?

When we last left Hideo he was leaving the outbreak site of the zombie plague on a train, but that was no rescue because the zombies have also got on board - how's that for commentary on the daily commute? - and there's one battering on the door of his carriage. Hideo could end the matter and protect the other passengers with a twelvebore lobotomy, but he still doesn't want to take his shotgun out of its locked carry-case; entirely apart from that being illegal and thus wrong (he could get sent to prison!), Hideo knows that he's no hero, he's only the bit-part in this story and he shouldn't be stepping up to the plate when it's been set up as a spotlight for a more suitable protagonist. However,  it's the job of the background extras to scream and run and die - despite his determination to put himself down Hideo has to admit that he really doesn't like the prospect of being eaten and he has to realise that, in a striking irony for an inveterate coward, standing out as the big hero might actually be the safer option.

In my review for Volume 1 of this omnibus I praised I Am A Hero for the achievement of turning over fresh soil in the well-ploughed furrow of the zombie apocalypse with its claustrophobic, clumsy confrontations and Volume 2 does manage to keep this up with some inventive scenarios. The terror of confinement in the cage is sustained in a scene where Hideo is taking a taxi ride with a pair of slowly-turning infected on the seat beside him and has to try and talk down their increasing irrationality to stop setting them off, which is perilous and gripping throughout and maintains the diversity of there being more ways to deal with zombies than shoot-'em-inna-'ed  target sessions that a lot of zombie titles slip back into at one point or another. Hideo does, eventually, use his shotgun in this book but his relentless repetition of "don't touch the trigger!" mantras (even to the extent of annoying his fellow survivor Hiromi), his fear of a shooting incident giving gun-grabbers more opportunity to tighten official restrictions, and unloading and reloading it whenever he points it up and down despite there being zombies around every corner who might not wait for him reinforces that he's not a veteran gunfighter, he's a civilian who's been mangled through a regulatory system. The muddled, amateurish fighting remains darkly comic with the fumbling and flailing around whether they're going to tie up or shoot Hiromi's zombified classmates, and an attempted escape by bike not really offering the opportunity for slick cinematic drive-bys on chasing zombies as trying to lift the shotgun only results on them overbalancing. All main characters in action stories benefit from a degree of Plot Armour - whatever the danger we tend to assume that the protagonists are going to survive because otherwise the story would end - and it does maybe cheapen Hideo (for all his cowardice, he'll man up and do the right thing eventually) but I Am A Hero sustains a sense of threat despite this because of how inexpert they are, and the simple interest again of how there needs to be other ways to escape than just charging in and smashing heads.

Talking about poorly-trained characters though, I did point out in my review for Train to Busan that zombie stories wouldn't last ten pages if there weren't at least some characters being utter imbeciles and this also happens in I Am A Hero - why yes, let's open the door to this chap with eyes bulging out of their sockets, blue veins straining over his face, gore dribbling from his mouth and weeping blood, that's an eminently sensible idea! However, while it provides the first jolt to get this volume moving at the beginning you can be reassured that it doesn't preoccupy the whole book. The inability for some to see what's happening even becomes something of a metatextual joke. Those stupid, useless face-masks that Japanese obstinately demand you wear whenever you're ill actually end up being handy in shielding you from biting teeth. There's a tendency in a lot of zombie fiction for the writers to be curiously shy about calling the zombies what they are, as if having civilisation be destroyed by reeking masses of "Lurkers", "Them" or "The Infected" will someone make their horror movies more respectable to artsy critics. I Am A Hero neatly punctures this self-important affectation with the absurdly exaggerated name affixed to the zombies by the government, as victims are told they are suffering from the stupendously bureaucratic "Multiple Organ Failure With Anti-Social Personality Disorder". Look out, the mofwasps are coming...!  Hey, it could catch on.

It's also quite thrilling to see the mofwasps too. The unsettling, unnatural spidery movement of the zombies that stood out in volume one now is enhanced further by the wild hurtling momentum of careering, colliding cannonball sprints of zombie packs as they chase cars and bash through obstacles. Framing has a role to play, too - when Hiromi remarks that she and Hideo have killed people escaping from the zombies, both of their heads are partially cut off by the panel edge as an embarrassed bent-head admission. An odd thing about the art though is seen on the cover, which shows Hideo wearing hockey armour that he doesn't even come into contact with anywhere in this book. It's not Dark Horse's fault - it's the same image used for Vol. 4 of the original Japanese release so you can't say it doesn't belong there, and Vol. 3's original cover was obviously unsuitable being a messy and obfuscated barely-legible image of a bloody phone booth  - and the production of the book is good in general (the detailed translation notes are appreciated) but perhaps it would have been more fitting to have used the cover image for the Japanese volume 2 instead as it used the image of Hiromi, the schoolgirl main character who is introduced in this book. Still, it's not a big deal and the image of Hideo wielding an improvised spear probably looks cooler to new readers picking it up off the shelf.

The art really stands out though when Hideo blunders out of the city and into Aokigahara - the notorious "Suicide Forest" in the foothills of Mount Fuji. This place is not the ordered ranks of tall pine trees though that is easy to draw in most other manga but a dense, choking, trapping net of brush and briars - it looks like photo-referencing has helped it along but it's still not something commonly seen. It may be nature but he thin trunks make it cold, damp and hostile, and it's an ideal backdrop for something I Am A Hero does that truly distinguishes it from so many other zombie stories. It's not just an action-adventure, or a political allegory, but a harrowing psychological scar as in this setting Hideo finally breaks down, curls down inside a pathetic ritual circle of whatever's in his pockets, and suffers a Long Dark Night Of The Soul as his delusions, sad little imps in Volume One, now become the things of nightmares dripping out of the shadows invading around his fading phone battery. There's not a zombie in sight, in whole spreads there's no more than a faint patch of grey that might be Hideo's arm in the weakest watery moonlight, and there's more horror there than anything else.

That's a big compliment for I Am A Hero, in that it recognises not just the fear of the zombies of what they mean for society but the lasting trauma they score into someone's soul, too. Hideo's declaration to himself that "I am a hero" is not him discovering inner power but a complex, compromised statement that makes this book as much fascinating as it is exciting.

9
Continues to set itself apart as a true original in a crowded genre. 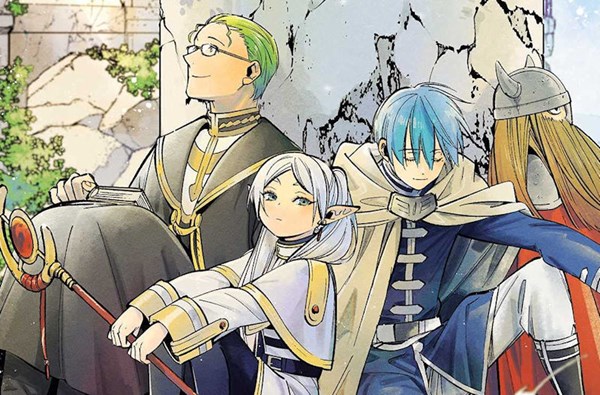