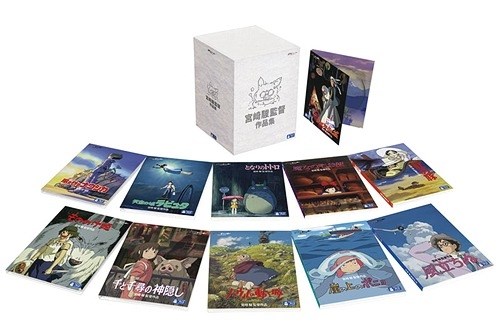 
Alongside what seems to be confirmation that we'll be seeing a UK Blu-Ray release of Studio Ghibli's Oscar-winning Spirited Away courtesy of STUDIOCANAL this November - thanks to a listing on Amazon UK's web site - another listing that has just appeared on the online store has piqued our interest even more.

The listing in question also comes from STUDIOCANAL, and takes the form of a £249.99 Hayao Miyazaki Box Set, set for release on November 3rd (the same date as Spirited Away on Blu-Ray, incidentally) and comprising of twelve discs on Blu-Ray.

Particularly given its disc count, it seems logical to assume that the basic content of this release will mirror that of the similar Japanese Blu-Ray release (an image of which can be seen above), which contained all of Hayao Miyazaki's directorial works for Studio Ghibli as well as Nausicaa of the Valley of the Wind and The Castle of Cagliostro. If the content of the Japanese and UK releases do indeed match, the final two bonus discs in the collection should include Miyazaki's 1972 pilot film Yuki's Sun and 1995 short film On Your Mark, three episodes of TV series Akado Suzunosuke which were storyboarded by Miyazaki, and complete footage of the 90-minute press conference where the man himself announced his retirement from feature film direction.

It's these extras on particular which could make this box set an exciting prospect for close followers of Hayao Miyazaki's work, and we'll certainly be trying to confirm further details of this release as and when we can.