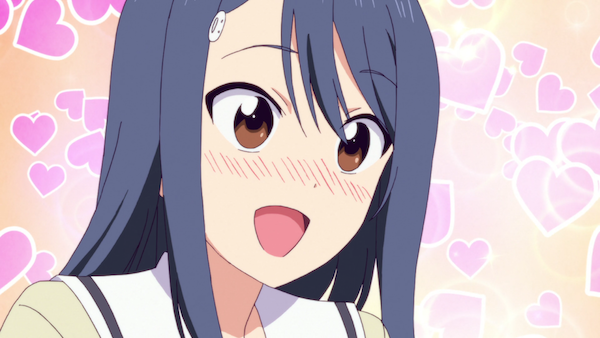 Allow us to introduce you to high school student Yoshiko Hanabatake: She is quite possibly the stupidest person known to man, as well as being a bit of a failure at life in general. If you ever had that one really annoying classmate at school who’d never leave you alone, then Yoshiko is that person. She’s got her sights firmly set on the studious Akuru Akutsu, who Yoshiko’s parents see as some kind of last chance saloon for their daughter to get married. Bonkers hijinks ensue as Yoshiko’s all round stupidity manifests itself in a number of unfortunate situations. This is Aho-Girl, it’s lewd, it’s rude, and it’s so very, very stupid.

While this season’s other ‘dumb fun’ comedy My First Girlfriend is a Gal has surprising emotional depths to it, Aho-Girl is vacuous to its very core. Spinning off its 4-koma manga source material into a spiral of brief sketches, each of which strive to contrast Yoshiko’s out and out stupidity with her penchant for winding up in weirdly observant situations. Anime has a long history of idiot-savant characters, just look at Non Non Biyori’s Renge for one of the finest examples, but none are quite as obnoxious as Aho-Girl’s Yoshiko.

This series may mine the same rich vein of daily-life slapstick as the likes of Non Non Biyori or Nichijou, but it does so without any ounce of the same sharp, dry wit. Instead, it’s all lowest common denominator laughs, which usually amount to a dirty joke or Yoshiko getting punched so hard in the stomach she all but passes out. It’s school-boy humour by way of the world’s worst ever school-girl. Yet, somehow, it never outstays its welcome and is never dull, which is more than can be said for many similarly low-brow anime comedies (we’re still trying to scrub last season’s Love Tyrant from our minds). This may be due, at least in part, to the short 12 minute episode length. Aho-Girl is short, sweet and silly - sometimes, that’s all we really want.

You can currently watch Aho-Girl in streaming form on Crunchyroll.

7
This braindead slacker comedy is as dumb as they come, but that’s all part of the charm.
LATEST REVIEWS